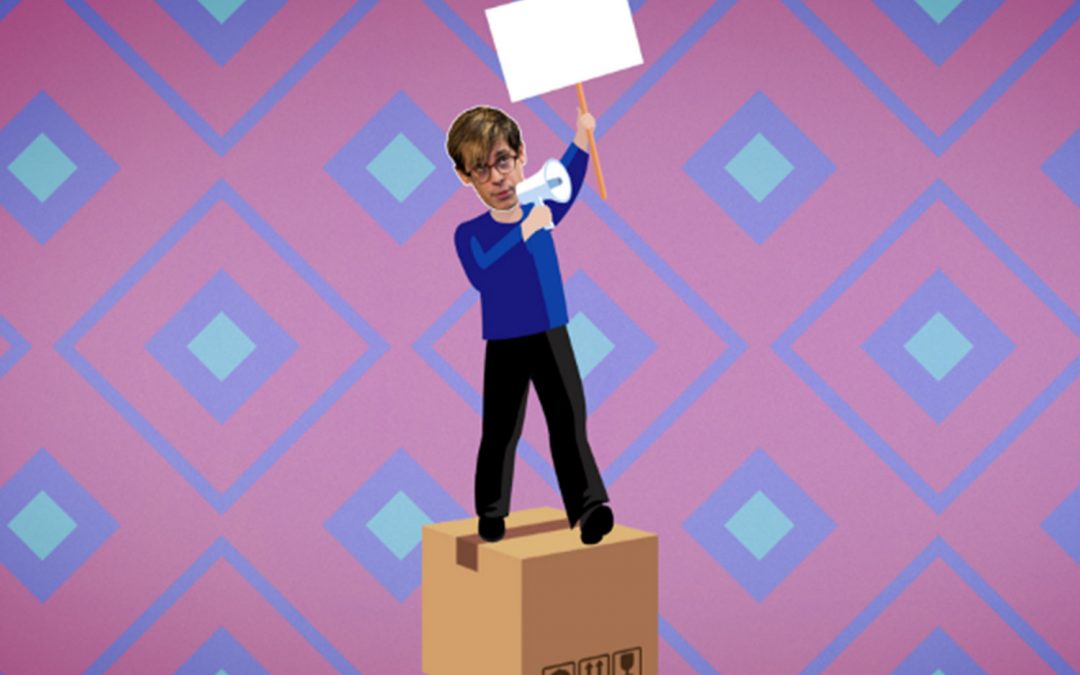 Blurred Lines: the rise and fall of Milo Yiannopoulos and the search for Truth in a post-truth era

Blurred Lines: the rise and fall of Milo Yiannopoulos and the search for Truth in a post-truth era

Milo Yiannopoulos is hard to fit into a box.

And he likes it that way.

Self-described as ‘a gay Jew with a black boyfriend’, one vitriolic towards political correctness, feminism, the transgender community, Islam. He is a also a self-confessed troll, purposefully sowing discord on the internet by posting provocative, inflammatory comments. He calls Donald Trump ‘my father’.

He has been a hugely influential spokesperson for a new generation of white youth who have lost faith with traditional politics, institutions, and media, lost faith particularly with the identity politics of the Left.

Some lines however just can’t be crossed. An older podcast was unearthed lastweek in which Milo appeared to endorse paedophilia. Within 24 hours, he lost a £250,000 book deal, had several lucrative speaking contracts cancelled, and resigned from his job as senior editor at Breitbart News.

The rapid fall from grace of this agent provocateur brings up some vitally important questions about the blurring lines of human identity and our quest for Truth in this ‘post-truth’ era.

As our trust in traditional truth-producing institutions (Media, Science, Education, Law) reaches an all-time low, where do we turn for Truth?

As boundaries of gender, sexuality, political alignments continue to blur, where do we stand? Do we need to stand anywhere at all?

How do these blurred lines affect our inner worlds?

Truth is a North Star

Like the North Star, human beings use Truth to guide them in important moments.

When a man has Stage 3 cancer and chooses chemotherapy, this is because he believes the doctor is speaking the Truth that this is the best possible treatment for him.

When a mother doesn’t give her child the MMR vaccine, she believes it is True that these vaccines can cause autism.

When an Inuit hunter catches a seal and treats the body with ultimate respect, he believes it is True the animal has a soul.

Whether you read the BBC or Breitbart, you choose your News platform because this is a trusted source of Truth for you.

What the Internet did to Truth

“The truth was a mirror in the hands of God. It fell, and broke into pieces. Everybody took a piece of it, and they looked at it and thought they had the truth.” (Rumi)

The internet has democratised Truth.

The outrageous ‘truth’ of Milo Yiannopoulos was in his previous job filtered by the Editor at the Daily Telegraph. Then he joined an alternative news channel. And his outrage was set free.

The democratisation of Truth is a good thing and a bad thing.

It’s a good thing because traditional institutions of truth-production have less power now. Imagine a white History teacher teaching a lesson on Slavery to an African student, the student armed with Google and a deep distrust of history-written-by-the-victors?

It’s a good thing because political correctness had until recently created a shadow, the shadow of the unspeakable. This repressed shadow has now emerged twisted and triumphant in the form of Donald Trump.

It’s a bad thing because now anyone with a laptop and internet connection can share their version of truth around the world. This leads to a Truth Tsunami, creating confusion, overwhelm, and a slow-burning anxiety.

According to Youtube’s company report from 2016, 300 hours of video are uploaded every single minute. The digital Tower of Babel is growing exponentially, and we are losing sight of our North Star.

With so many versions of the Truth, when the boundaries of our identity feel threatened, we become desperate, we look for anything that appears strong to hold onto. In this space, only the most provocative clowns and marketeers stand out above the noise (Milo, Donald Trump, Russel Brand).

Welcome to the click-bait Reality TV show that is 21st Century life. A highly entertaining one, for sure. But, consider for a moment what the impact of this 24/7 media circus is on our selves, on our capacity for empathy, on our common humanity, our North Star?

The personal is (still) the political

In my psychotherapy practice, I’m seeing increasing levels of anxiety in both adults and particularly in children. Rather than treating this anxiety as a symptom to be gotten rid of with meditation or medication, I see it as the body’s way of showing us that something is not right in the bigger picture. The personal is (still) the political.

Take Molly, 15. When Molly first comes to me, she has been having debilitating panic attacks for over a year. When I enquire into what the triggers might be, she tells me she worries constantly about Donald Trump, terrorism, and other people’s judgments. When she is on social media, her friends share clickbait articles with highly dramatic headlines like ‘FIVE WAYS WE ARE ALL ABOUT TO DIE’. When she is on Instagram, she worries about keeping up her digital appearance. She is able to curate an acceptable version of herself through her beautifully framed photos. These photos tell the world she is cool, she has good taste, she is lovable. But when she interacts with other kids at school, a panic builds up in her that she isn’t really cool or lovable. Instead of being comfortable in her own skin amongst her peers, she regularly chooses to avoid contact. This means the anxiety just continues to build.

Increased anxiety levels are to be expected when the designers of our digital addiction are driven by profit. Digital media channels are designed with one purpose: divide our attention and conquer. Let’s be absolutely clear: Facebook, Youtube, Instagram etc, get paid per click. The more you click, the more they make money. Yes, it is really that simple.

I was recently discussing with a colleague of mine — an expert in this area — how the Silicon Valley elite use ‘dumb phones’ because they know how addictive and distracting smart phones can be. He put it quite bluntly and brilliantly: ‘Do you think the CEO of Macdonalds eats a Big Mac meal every day?’

The attention economy, along with the democratisation of knowledge, together have created a new mental health phenomenon: Infobesity. ‘Infobesity’ defines our current addiction to information, and the pernicious consequences of that.

One of the greatest risks of our Infobese generation is that our will to committed action is weakening. The internet has no doubt made it easier than ever before to organise a protest. Indeed, many internet utopians had gotten carried away in what Evgeny Morozov calls the ‘net delusion’.

For example, in 2010, Wael Ghonmin set up a basic, anonymous Facebook page — ‘We are all Khaled Said’. Kahled referenced a 29-year-old man who had been tortured to death by the police in Egypt. In 3 days, the page had 100,000 followers, and is credited with kickstarting the Egyptian Revolution. But as Wael says in this Ted Talk, soon “the euphoria faded, we failed to build consensus”. Social media transformed quickly from a revolutionary tool to a breeding ground for misinformation and trolls: “the same tool that united us to topple dictators eventually tore us apart.”

As we all become more infobese, as we succumb to attention-slavery, filling the coffers of the Silion Elite with our daily clicks and scrolls, our ability to commit to courses of action gets weakened. In the 1960s, post-Marxist philosopher Herbert Marcuse coined the term ‘one-dimensional man’, to describe how new forms of media technology (especially television) were deadening the radical potential of human consciousness:

“Our society distinguishes itself by conquering the centrifugal social forces with Technology rather than Terror, on the dual basis of an overwhelming efficiency and an increasing standard of living.”

In the age of digital media, as the number of channels increases exponentially, we are no longer one-dimensional man: we are the ‘fragmented human’. The end result is the same or worse: our radical potential is suffocated.

Danish philosopher Søren Kierkegaard recognised the superficiality of our civic engagement in an entertainment-focused generation which he called ‘the present age’:

“essentially an age of understanding and reflection, without passion, momentarily bursting into enthusiasm, and shrewdly relapsing into repose. … There is no more action or decision in our day than there is perilous delight in swimming in shallow waters.”

In some ways, we can imagine life was more simple in the past. I have written elsewhere about how traditional social and religious structures emerged partly to provide a solid framework (‘a sacred canopy’ as sociologist Peter Berger describes it) within which humans could find and sustain meaning, a moral fabric through which people would weave their decisions. For some, the only book they would ever have had access to would have been the core religious text of their culture: Bible, Koran, Bhagavad Gita, etc. Even if they could not read, there would have been a much-reduced menu of values, assumptions, and beliefs about how to live life.

Today, we the ‘fragmented human’ are being called to rediscover our sacred canopy, our North Star. Without this common Truth, our attention will become ever more fragmented, enslaved. In Proverbs, we are warned: “Without a vision, the people will perish.”

For one, we share the same biology and psychology. Yes, our bodies may be different shapes and sizes and colours, but the inner mechanics are largely the same. As the world becomes more virtual, we will need more than ever to return to the wisdom of our bodies. For example, human beings are born with a biological capacity for altruism. When we see another human being in suffering, something in our heart instinctively wants to reach out and help. Spiritual traditions have long recognised the heart as a powerful source of wisdom. This ancient wisdom is now validated by the science of neurocardiology. Our innate capacity to be kind can be either nurtured or blocked, by parents, by schools, by the social, political, economic system. My heart fills with hope when I meet pioneers using our understanding of our biology to build trust and bridge divides. Dr Rony Berger, for example, has been successfully using embodied compassion practices to cultivate tolerance between Israeli and Palestinian children. Imagine a world where evidence-based compassion-practices are at the core of education systems around the world.

Human beings are also uniquely aware of our own mortality. This awareness makes us uniquely terrified in the animal kingdom. We bury the terror deep, deep down. And to assuage the fear we build temples of permanence. These temples take on ever more imaginative forms: we build our love for celebrities, we become more punitive, we are more materialistic. My work with people at the end of life has shown me time and again that a more direct, compassionate confrontation with the reality of death can bring out the very best in people. Imagine a world where we talked about death more openly with each other, with our children. Death-ed: it may sound crazy, but we need a strong medicine to wake us up right now.

The increasing levels of anger, anxiety, and depression that I see in my practice is a wake-up call. Instead of medicating or meditating these symptoms away, I believe we need to channel the energy trapped within these symptoms towards systemic change. Gandhi had a name for this practice. He called it ‘truth-force’ (satyagratha).

In our age of blurred lines and weapons of mass distraction, we need truth-force to counter the shadow energy that is co-opting this digital revolution.

Jonathan Swift put it well when he said: ‘Falsehood flies, and truth comes limping after it.”

There is a limping truth buried deep in our hearts right now that yearns to be set free, and it is simply this: we are all one.